I was lusting after a Clarsonic for awhile but just could not bring myself to pay so much for one. I think I actually wanted one more because it felt like I was the only person on earth who didn’t have one. I did need something to exfoliate my face though in a bad way. I get very dry patches around my mouth and the skin actually has to flaked off and almost polished to make it smooth again. So I knew one of these little “micro scrubbing thingy’s” would do the trick. My husband told me more than once to “just go buy a Clairsonic.” But when I thought about how much stuff I could buy with the $150-200 that I would spend on one, I just couldn’t do it. So I started looking for a cheaper alternative and found this little guy. 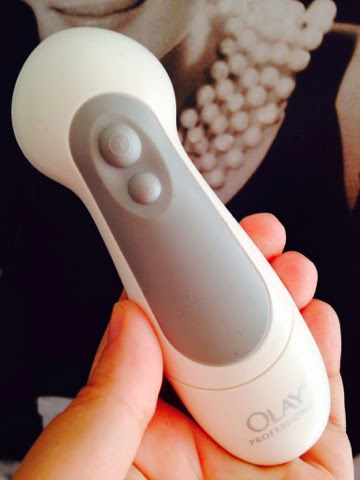 I figured there was absolutely no way that this could even possibly compare to a Clairsonic. But then I stumbled across an amazing review for it on Amazon. The girl who wrote it basically said she owned one of these and loved it. But then she jumped on the “Clairsonic Bandwagon” and bought one. After using the Clairsonic for a few months, she can honestly not tell any difference between the two. So I found her honesty refreshing and exciting. I went to my local Target who sold these for $25, and my Walgreens had them for $24.99. I literally had one in my basket at Walgreens and something told me to put it back and keep looking for it even cheaper. So that night I went home and jumped back on Amazon. I found a few sellers who had them for around $15 which is a great price, but then it would come out to about the same as buying it in store once you add shipping. So I quit looking for awhile and then decided to quit bring so darn cheap and just pay the $25 for one. I mean after all, it was still way cheaper than any of the Clairsonics. So I went back onto Amazon and found one for 15.00, and it had FREE SHIPPING, and there was a $3 off coupon that you could click on too. So once I did that, I ended up getting it for $12.98 with tax and free shipping! I don’t think I could have gotten a better deal. The only reason I’m even telling you about how cheap I got this for is to remind you to always check online when you have your eye on something. You never know what kind of deal you might find! Anyways, now on to what I actually think about the product itself. 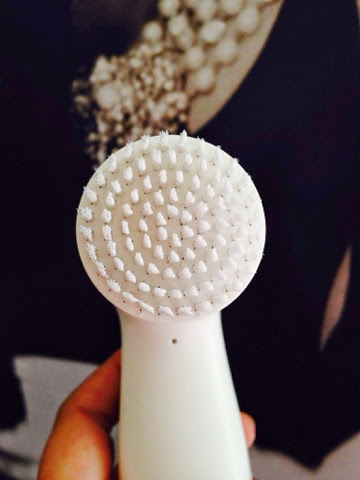 This is what the cleansing scrubber looks like. I thought that the bristles were going to be a lot more stiff than they actually are. But to me they feel kind of like a medium bristle tooth brush. Their just firm enough to do the job without over doing it. I have been using the exfoliating cleanser that came with it on the brush. And then I have also tried it with a regular face wash that I am currently using too. The Olay exfoliating renewal cleanser has a tiny bit of grit in it, but it’s not like most exfoliate’s I’ve used in the past where their very gritty. I used to think that the grittier they were, the better. But I have recently learned that those really gritty ones can actually be dangerous so this was a nice change for me. 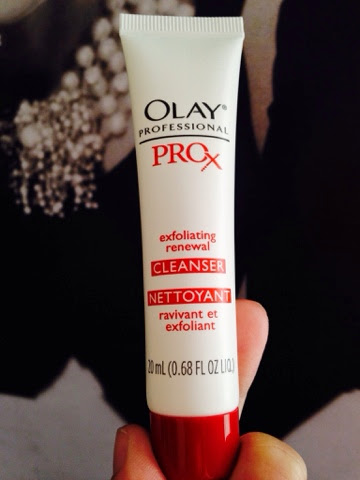 I have been using the cleanser and the brush for about a month now, anywhere between 2-3 times a week. I think for most people they probably wouldn’t have to use it as much as I do, but since I have the dry patches it really helps me to get rid of them. I noticed by the end of the second week that my face did break out a little more than normal. But from other reviews I have read about this type of product, that seems to be pretty normal for a lot of people.

The most noticeable change to me that I saw was the day after using this, my makeup always looks much better than normal. I have large pores, scars, freckles and some acne. So basically horrible skin and so it’s always tough to make my skin look flawless. But if I use this before bed, the following day my skin looks “soft and polished.” And that makes my makeup go on so much smoother which then seems to help me radiate a healthy glow. The brush on this Olay Pro seems to rotate just powerful enough to get off that upper layer of dead skin that makes your skin look so dull. I also checked into the price of the head replacements for these because I have seen several people post about how they can’t afford to replace the ones on their Clairsonic’s. The average price for 2 of these runs between $10-15. So the actual product and the replacement heads are both super afforadable on any budget!
Overall I am extremely pleased with this gem and would definitely recommend it to anyone. I’m so happy that I finally decided to just go ahead and buy one. I really think that this product can make a world of difference over time!
Thanks for reading my review ladies! Please let me know if any of you have tried this and what your thoughts are on it!
~Julie
AKA “Thesaltlifewife”

This site uses Akismet to reduce spam. Learn how your comment data is processed.

This error message is only visible to WordPress admins